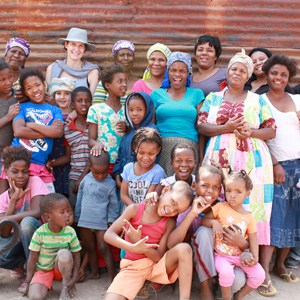 Continuing to empower families through their embroiderers in Hoachanas, their finishers in the city and their sales team at their sites in Windhoek, Anin is a Namibian brand to be proud of and one intent on putting the country on the map while underscoring embroidery as an art form.

The first thing you may notice about House of Anin’s products are the names. The understated and embroidered monikers on the back of scatter cushions that hint at the person who wrought them in a subtle acknowledgment of the hand behind the embroidery.

It’s a nice touch included by even better people. Heidi von Hase who gathered a group of Nama women from Hoachanas under a camelthorn tree 30 years ago to see what they could do and Anabel and Stephan Loubser who have recently taken over House of Anin’s acclaimed reigns with a renewed focus on painstaking hand embroidery.

Employing over 300 women at the height of House of Anin’s 30 years which saw the proudly Namibian textile company export the finest bed linen and home textiles to Germany, South Africa, New Zealand, the UK, the USA and Norway while earning pride of place in houses and lodges in Namibia, today Anin has scaled down considerably in an authentic, one-of-a-kind return to its roots.